Happy 6th Birthday to Thurston. This is a day we were not so sure we would ever see. Really enjoyed his little party at home with his brother Raffie and his Mom. Got a new futon and a pot of chicken soup (with no onion and no seasoning!). Had a great time taking treats for all his friends at Day Care where he got into the big swimming pool! So nice to see him getting his confidence back. 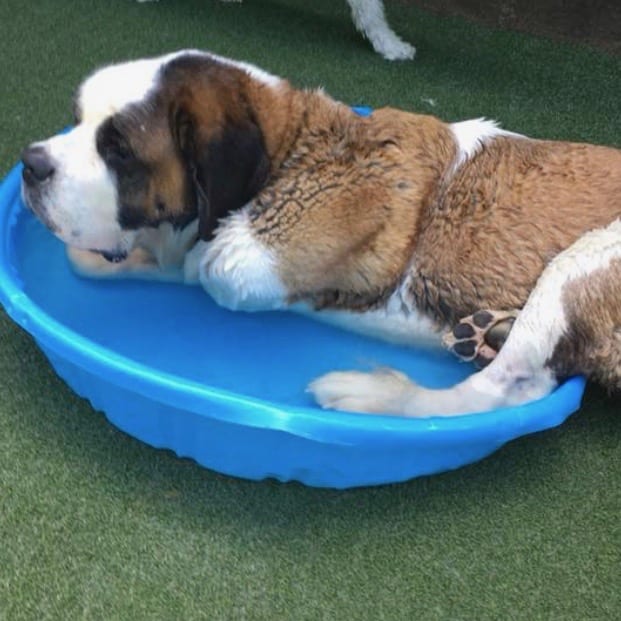 That’s me in the pool at Paws in Time, West Chicago. My favorite place on Earth! They HAVE a pool for big dogs, but I can’t get out of it so I just take over the small dog pool!

At 3 1/2 months after surgery and 2-3 weeks post chemo Thurston enjoys most of the things the he loved to do before April 22, that awful day when our world changed forever. We want everyone to know that Life is Good and we appreciate every moment that God gives us! His Birthday is August 31 and he will be 6 years old! Looking forward to a big piece of cake and some ice cream! Maybe even a party hat!

August 31,2018 marks an AWESOME day for Thurston! That’s his 6th Birthday! (This is his new futon. I gave it to him early because I am a great pawrent!) A day back on April 22 that I was pretty sure I wouldn’t have a chance to celebrate! He 3 1/2 months post amputation and is doing great! His mobility is amazing. He was never the most active dog, he liked going to Day Care, going in the pool, and mostly just lounging around. He was much too lazy to ever want to go for walks or to chase a ball! Never! So the loss of his right front leg hasn’t really changed his activity all that much, and I would strongly encourage anyone not considering surgery for their giant dog to reconsider! He easily gets into the car and can even jump up on my bed now! He no longer slips on the hardwood floors and I was able to take up all the runners. He can walk about 2 blocks without needing to rest, assuming he’s going somewhere that he actually WANTS to go! When were going to the vet, he might want to stop and rest after every 20 steps!!

Even during chemo, his appetite was alright. At 185 pounds prior to surgery he is now 136. Still could stand to lose a little weight, but so could I! As a home care RN I know human cancer patients’ appetites  often change during and after chemo and I think that’s true for furry patients too. Thurston always ate dry Iams mini chunks but now he will only eat that if I add something interesting such as a can of moist dog food with some warm water. In addition I found that he loves beans! Since all canned beans I could find contained onions and various spices I now just make his myself. I get mixed dried beans, add some extra black beans and pintos and just boil with salt pork until they are really overcooked and soft. He loves the soup when added to his dog food. He also enjoys baked sweet potatoes. I get 5 very big ones wash them, wrap in foil and bake til really soft. Then I refrigerate and give him one a day (more if he won’t eat anything else). Remember to peel them before serving. I just score the skin , cut off each end and peel with my fingers. It comes off easily.

Shortly after his surgery and during/soon after chemo he would get nervous/agitated or drool a lot! This meant he was nauseated and Cerenia given once daily as needed resolved that problem. You need a prescription for it and its pretty expensive but so worth it! I also found CBD oil made from hemp seemed to help calm him down as well. There was no clear dosing on the bottle I had so I started with 1/2 ml and increased gradually to 1 1/2 ml 3x a day. The one I used is made by Serenity and is 500mg in 2 ounces and is available on Amazon. Petsmart also has something called Licks Zen Calming Aid that is a homeopathic treatment that really surprised me at how well it worked.

He doesn’t need any of that any more. He got a new futon for his birthday and I gave it to him a little early just because I love him and want to be a good pawrent! Please continue to follow our story. I will continue to offer the things I found helpful. Shout out to the team at University of Wisconsin for their wonderful support.

Thurston is a floppy dog. A giant dog with a huge personality and many wonderful qualities I love him more every day! He was  5 years 8 months old when he started limping intermittently and was diagnosed with Osteosarcoma of his right foreleg at the wrist on 4/22/2018. He was amputated at University of Wisconsin on 5/11 and has since completed 4 rounds of Carboplatin. He is now participating in a clinical study and so far, so good. His story needs to be told and I am planning to do just that as soon as I can figure out how to operate this blog. Keep an eye out for future postings and pictures appearing as soon as possible! Love and encouragement to all the Tripawds out there. Tripawds and St. Bernards rule!!! Please see ALL ABOUT US on this site for more information!